Posted at 16:18h in Traffic Law by enet_osi
Share 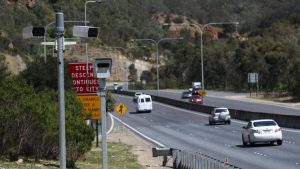 *UPDATE* On 6 December 2019 the laws were amended so that a driver who expiates a first offence (ie, no previous expiations or convictions for THIS offence) will not receive a mandatory licence disqualification. Demerit points still apply. A driver who elects to be prosecuted for a first offence will, upon a finding of guilt by a court, be disqualified for six months. It is even more important now to get legal advice BEFORE you make a decision on paying the fine or electing to be prosecuted.

New legislation introduced on 1 May 2019 drastically increases the penalties for trucks and buses exceeding the speed limit on “prescribed roads”.

The penalties are hefty. If a driver is given an expiation notice, the fine is $1 096. If the fine is issued to a corporation, the fine is $26 096!!! Clearly this is an incentive for corporations to nominate an individual driver, rather than paying the corporate fee in order to avoid demerit points.

It gets worse. If a driver elects to be prosecuted in order to try and prove their innocence and is found guilty, then the minimum licence disqualification is increased to 12 months!! (for a “first” offence after 6 December 2019, the mandatory minimum disqualification is now 6 months). This is incredibly draconian legislation and will likely be the subject of a High Court appeal. I query the legitimacy of a law that is openly designed to discourage people from exercising their right to defend themselves. “If you elect to be prosecuted, the penalty is double”. Nevertheless, this is the current law.

The gear restriction offence will only be detected by police present to witness the driving. Prosecution of this charge is subjective and will depend on the interpretation of “safely”. A charge will likely only succeed when there is eye (or ear) witness evidence that the primary brake was used.

The speed restriction offence will nearly always be by way of an expiation notice sent in the mail because there are speed cameras conveniently set up within a few hundred metres of the commencement of the “prescribed road”. Hundreds have already been issued.

I am really concerned that drivers are paying the expiation notice without understanding the consequences. I am also concerned that drivers are electing to be prosecuted without understanding that if they are found guilty by the court, the minimum licence disqualification period is 12 months. You cannot go to court to attempt to explain why you were speeding and to ask for a reduction in penalty. The Magistrate has NO discretion.

If you receive an expiation notice for driving a truck/bus at more than 10kph over the applicable speed limit, then you need to get legal advice from an experienced traffic lawyer before you either pay the fine or elect to be prosecuted.