03 Nov CITIZEN’S ARRESTS: WHAT ARE THEY, WHEN CAN YOU PERFORM ONE, AND WHAT ARE THE RISKS?

Posted at 15:48h in Criminal Law by enet_osi
Share 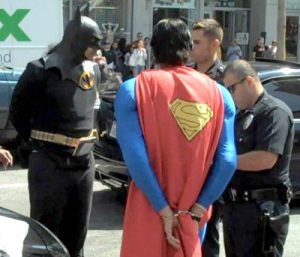 Citizen’s arrests have been in the spotlight recently with stories about people detaining offenders breaking into their homes. There has also been a recent court case when a man was himself charged after performing a citizen’s arrest. Let’s look at what a citizen’s arrest involves and when it can be performed?

The power to arrest someone without a warrant is contained in the s271 of the Criminal Law Consolidation Act, which states:

(2) A person who arrests and detains another under this section must take the necessary action to have the other person delivered into the custody of a member of the police force forthwith.

(3) A person is liable to arrest and detention under this section if the person is in the act of committing, or has just committed—

(a) an indictable offence; or

(b) theft (whether the theft is a summary or indictable offence); or

(c) an offence against the person (whether the offence is summary or indictable); or

(d) an offence involving interference with, damage to or destruction of property (whether the offence is summary or indictable).

As with most laws, nothing about this is straightforward at all. So let’s break it down a bit.

The offences that are covered are theft, offences against persons (assaults), property damage, and indictable offences (offences that carry more than two years imprisonment). Most non-legal people wouldn’t know what an indictable offence is, so a good rule of thumb is that if the offence is one in which there will be a victim who could be injured or have their property damaged or stolen, then an arrest can be performed.

There are several limitations on citizen’s arrests. If the arrest was not legal, then the tables could be turned, and you could find yourself being charged with assault or deprivation of liberty. For this reason, performing a citizen’s arrest should only be done if you need to stop someone committing a serious offence or there is a real risk that they will get away.

The other important thing to note is that if you have performed a citizen’s arrest, you must take that person to the police “forthwith”, which means as soon as possible, bearing in mind several factors. If you don’t have a phone on you and you don’t have a car, then “forthwith” would mean longer than if you had a phone and could call the police immediately. “Forthwith” definitely does not mean after you have taken the offender to a dark room with a single light bulb, tied them to a chair and tried to extract a confession from them.

Don’t be a hero

If you have witnessed a crime, think very carefully before making a citizen’s arrest. If the offender is under the influence of alcohol or drugs, they might be unpredictable or violent. You are risking your life if an offender suddenly becomes aggressive.

If you don’t follow the law then you could be charged with serious offences yourself. You may have good intentions, but good intentions aren’t a defence.

If you find yourself in a situation when you need to perform a citizen’s arrest, here are some guidelines:

Don’t set someone up to commit an offence with the intent that you will then arrest them
Use the minimum force required. Some offenders might not resist at all. In that case, don’t touch them
Tell that person that you are making a citizen’s arrest and tell them why
Call police as soon as you possibly can
If you suspect the offender is a juvenile, don’t make a citizen’s arrest. There are special duties owed to juveniles and the risk of not complying with the laws, thereby committing an offence yourself, are significantly increased
You are not a superhero sent down to protect the world from evil. Arrest someone only if there is no other option and the crime is serious enough to warrant the offender being stopped. Arresting someone for stealing a lollipop from the supermarket is probably overkill.